Getting the BeagleBoard going 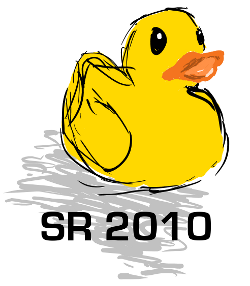 Recently I’ve been playing around with my BeagleBoard to get the software situation sorted out for SR 2010 by the time our hardware freeze hits. I really don’t want another year of using slugs (NSLU2s).

I set up a development tree to contain our work, and I’ve written instructions on our wiki on how to get started with the SR BeagleBoard software situation. The Beagle information on our wiki pages might be useful to others outside SR as well.

The Beagle beats the NSLU2 hands down when it comes to computation. That’s not the only advantage that it has over our old friend. We had to manually hack up the NSLU2 in unpleasant ways before we could ship it:

Yes, we had to hack at the NSLU2s with a spoon.

We’re building a board that will sit above the Beagle that’ll make use of its expansion connector. The interconnect on SR robots uses I2C (my hopes for SR 2011 are currently set on RS485). The Beagle will master our bus. One thing that is a definite advantage of the Beagle over the NSLU2 is that the NSLU2’s I2C was bit-banged; we actually have access to a proper I2C peripheral this time.

The Beagle’s serial ports are a major advantage too. We could only access one serial port on the NSLU2, which meant we had to sacrifice serial console (imagine building a kit car then testing it by driving it blindfold) for it to talk to the radio module. The Beagle has at least 2 serial ports accessible, so there’ll be no misery there!

I’m quite surprised by the current state of the BeagleBoard community. It’s relatively young in comparison to the Gumstix community, but it already feels like there are many more people contributing to it. The kernel seems to be driving the board OK now (USB host has only just become functional in 2.6.29 for me), but there are still a fair number of extra bits and pieces that still need cleaning up. The most crucial one of these (for SR) is the configuration of the multiplexed pins connected to the expansion header.

So my current SR task is to get up to speed with the OMAP technical reference manual and brew up some patches that let us use I2C.

Because Orcad Capture’s “DSN” files aren’t a free or open format, I’ve converted the beagleboard schematics into a PDF on Uni machines. Enjoy. The PDF file is a derivative work of the files produced by the beagleboard project, and is licensed under a Creative Commons Attribution-Share Alike 3.0 license.